Thank you to UMB Bank for being the 2023 Presenting Sponsor of the Chancellor's Martin Luther King, Jr. Scholarship Luncheon.

Join Metropolitan Community College at the 2023 luncheon for a conversation on Social Justice FOR ALL. All funds from the event provide scholarships for MCC students. This year's event features a thought-provoking program focusing on current events through the lens of Dr. King's teachings.

Thank you in advance for supporting our mission of ensuring access and affordable education to all. Donna Brazile is a veteran political strategist and a New York Times bestseller. Ms. Brazile has devoted her life to working for progressive change, responsible governance, and the advancement of ALL people in a society that is fair and equitable. She first got involved in politics at the age of nine when she worked to elect a City Council candidate who had promised to build a playground in her neighborhood; the candidate won, the playground was built, and a lifelong passion for political progress was ignited. Brazile has worked on every major presidential campaign since 1976 and, in 2000, she became the first African American woman to serve as the manager of a major party presidential campaign.

Ms. Brazile loves working with young people, encouraging them to vote, to run for office, and to work within the system to strengthen it. She has lectured at over 200 colleges and universities across the country on such topics as “Inspiring Civility in American Politics,” “Race Relations in the Age of Obama,” “Why Diversity Matters,” and “Women in American Politics.” Ms. Brazile was formerly a contributor to ABC News, CNN, and a syndicated newspaper columnist for Universal U’Click. Most recently she’s joined Fox News as a commentator.

Ms. Brazile is the founder and director of Brazile & Associates LLC, a general consulting, grassroots advocacy, and training firm based in Washington, DC. At the 2023 Luncheon, she will speak on social justice FOR ALL. 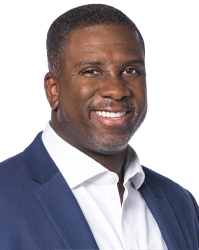 Kevin Holmes, is the evening news anchor and reporter for KSHB 41. Kevin has nearly 20 years of experience and is a 17-time Emmy nominated Journalist. In 2021, he received a Mid-America Regional News Emmy Award for Best Anchor. And in 2022, Kevin received the Missouri Broadcasters Association Best Anchor Award.

Under Kevin’s leadership the station received its first ever Missouri Broadcasters Association Award for Station of the Year. Kevin is the first black male anchor to be named to the 10 p.m. broadcast in Kansas City and is one half of the first all-black primary evening anchor team in Kansas City history. Kevin is an advocate for mentorship and he works with youth in the Kansas City Public School District as well as working with the Urban Ranger Corps. Kevin has spearheaded and chaired a campaign called Gift of Sole, that raised nearly $50,000 to purchase 800 pairs of shoes for underserved children in the city. Kevin is a native of Chicago, IL and has a Bachelor’s Degree in Communications from Lake Forest College. He is a member of Kappa Alpha Psi Fraternity and a member of the National Association of Black Journalists.

Thank you in advance for supporting our mission of ensuring access and affordable education to all.