The VIPs on hand donned hard hats and put their backs into the task of turning over a few shovelfuls of earth. But before the manual labor came the remarks, such as Chancellor Kimberly Beatty declaring that this groundbreaking "marks a new era for Metropolitan Community College."

The Engineering Technology building on the south side of the MCC-Penn Valley campus should be finished by the start of Fall 2021 classes. Meanwhile, a facility at 2944 Troost Ave. is about to be transformed into a "state-of-the-art skills training center" for a new generation of construction, HVAC, welding and manufacturing workers, Dr. Beatty said at the Oct. 6 Penn Valley groundbreaking ceremony.

These two building projects in the urban core represent a continuing commitment by MCC to align the workforce training it offers with industry needs in Kansas City. By relocating programs from the MCC-Business & Technology campus near I-435 and Front Street, the College expects to increase diverse student enrollment in the engineering, advanced manufacturing and skilled trades programs, the chancellor said.

"We will also create new educational and job opportunities for students living in the heart of the city and become an even greater community resource," Dr. Beatty said.

Construction of the $7.2 million Engineering Technology facility, which will adjoin Carter Art Center and the Physical Education building (and includes some renovation of existing space), represents "a big day for all of us, a bricks-and-mortar milestone for the Penn Valley campus," said Tyjaun Lee, campus president.

Having ETEC students — who train at MCC for careers such as drafters, designers and engineering technicians — next door to the graphic design and visual arts programs will allow for "more cross-discipline innovation," Lee said.

The 16,000-square-foot Engineering Technology building will house classrooms, MCC's FabLab maker space, a 3-D printing/prototype lab and the Burns & McDonnell Design Innovation Lab. The relocation of these resources to Penn Valley will put the campus "one giant step closer to being the gem in midtown," Lee added.

The outdoor ceremony, which included pre-show music from the Rick Cole Trio, was also live-streamed. In light of the COVID-19 pandemic, organizers encouraged virtual attendance.

Jermaine Reed, representing the Board of Trustees, told those gathered under a tent that MCC is "not just a college on the hill, but we are a community college that is providing real opportunities and an ecosystem for so many people within our community."

Albert Ray of architecture firm Hollis + Miller said he grew up and still lives just blocks from MCC-Penn Valley. "This project meant a lot," he said, noting that students were involved in the design process. Some of that process had to move online after the start of the coronavirus outbreak.

One day, Ray said, he brought his high school-age kids to the site. His son, who's interested in engineering, "asked me what kind of things were going to be in that space, and I described them. He looked around and was like, 'Sweet!'"

The earth-turning at ceremony's end was done in three shifts, with the shovels sanitized in between. Earlier, the microphone and podium were wiped down between speakers, too. 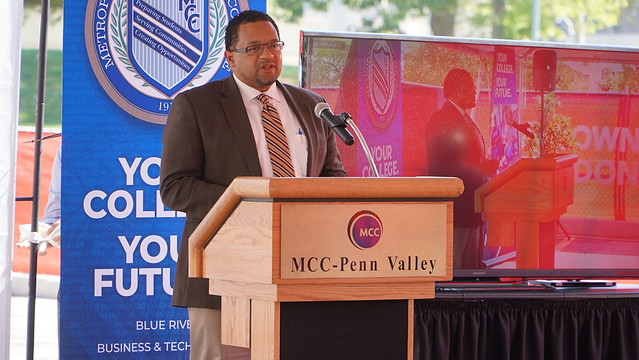